The Higher Society Illustrated APK Download: This is a page created for supporters of The 2nd Chance. Your support will help us create a great game with several days of gameplay.

I started writing this story in 2019. My intention was only to write a small story with multiple options and see if I could put it into Ren’py. I had no prior experience with programming and was not convinced that I could make it work.

My programming skills are still not very impressive, but I managed to make a playable Visual Novel. Some will perhaps say that it was not much of a visual novel because I didn’t create any renders. I just used some placeholder pictures and focused on writing and learning basic programming. My small story turned into a very long story, and I even had to split it up into two seasons!

Ported to Android
its a ported pc games, which might not compatible for some devices..

When I started making this game, I had no intention of sharing it with anyone. This was for my own amusement. I wanted to learn programing, create a story, and improve my English skills. After I had finished season 1 and spent almost a year doing so, I got curious if anyone else would enjoy my story. I published it on f95zone.to to see if anyone wanted to play it.

Even if I tagged the game as a text-based game, many was frustrated by the lack of visuals and gave the game bad reviews because of that. But many of those who played the game loved the story and that motivated me write another season to the story.

December 2020 one artist contacted me and asked if he could make the visuals for the game. I of course accepted and we have since then been working on this project. The first artist had to pull out of the project at some point because of things in his personal life, but other artist has helped me, and we are now finally ready to release the pilot.

The pilot is just a little more than 1 day of gameplay while the entire story is more than 50 days of gameplay. So, to finish this project I will need more artist to help me or have one artist that can work full-time. Hopefully this Patreon site will help me finance the project and I really appreciate any help you can give me.

The story is about a man who moves to LA to help his best friend in a movie-project. He leaves his ex-wife and grown-up daughter and starts his new life in Hollywood. His life soon becomes more complicated and especially his love life. It doesn’t get less complicated when his daughter and her best friends comes to live with him. 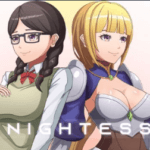